Since the beginning of her career, Maria Cristina Cortes has dealt with the subject of landscape and has been addressing the destruction of nature at the hands of man for a while. Already in Chambas (1998 – 2001), there were floating objects in her paintings in sometimes murky and polluted water. In more recent works such as Rastrojal (2008) and Quebrantos (2010), half-burned logs and charred tree trunks have also made an appearance.

Something that has characterized her work is constant experimentation, both regarding the angles she adopts to watch and compose, and technical resources she uses that have resulted in collage and in the insertion of black and white where color previously prevailed. Due to these changes, when I was going to her studio to write this note, I did not know what kind of landscape I was going to find.

Upon entering the studio, I was surrounded by crackling fire. On the walls, powerful images of a forest fire reminded me of Turner and the native forest that recently burned for three days while a fine ash covered the south of Bogotá. The cause, according to the press, is a long summer, added to the action of a couple of arsonists that may have not been identified yet.
Moving into the next gallery, the change was abrupt. If I had been almost feeling hot before, now I was cold. In exchange for the crackle of flames, I was immersed in a silent, cold and quiet landscape. On the walls, paintings of vast expanses of standing water from which roofs, fragments of city and foliage emerged. In them prevails a kind of silencing of life, while in the others destruction progressed with extreme vitality, promising to devour everything.

When I left her workshop a torrential downpour quickly flooded the road and stopped traffic. There I was detained for about two hours, watching the gusts that would not stop. Meanwhile I reflected on the power of fire, in the devastating action of water and the relevance of the painting I had just seen titled: DESMADRE. Desmadrado, according to the dictionary, is one that has been abandoned by a mother. Desmadre, what went berserk, a river that burst its banks. It also means loss of control.

While the theme of this new exhibition is the chaos of nature that we are now experiencing, her work is a sign control and knowledge of a trade that has been exercised through a constant search that has always reminded me of different moments art history, the taste for pictorial surfaces. Her fires, sometimes realistic, sometimes almost abstract, show her mastery of pastels, to which she has frequently resorted since her first works, which have celebrated the light of the savannah ever since. The canvases are intervened with printing methods and perhaps the overwhelming force emanating from them is due to the black color of the base fabric, from which her orange flames and gray smoke emerge. In floods you may remember wounds, but there are no longer floating objects or sticks, or boxes. Under water or under layers of oil, helpless and small human constructions, houses and cities can now be seen. Man is minimized, it becomes fragile with the overwhelming power of nature that has lost control thanks to man’s irresponsible action, his lust for power and domination.

But above all, between fire and water, between the oil and pastels, we have good painting. 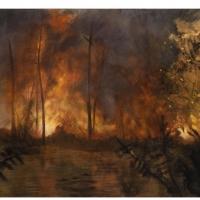 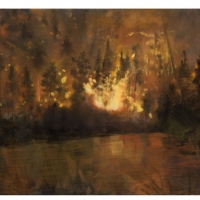 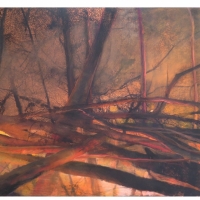 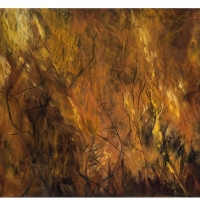 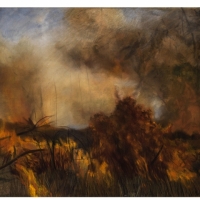 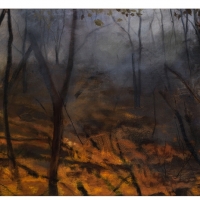 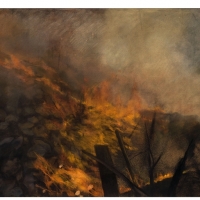 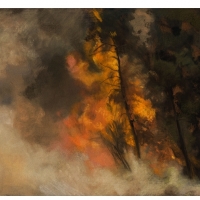 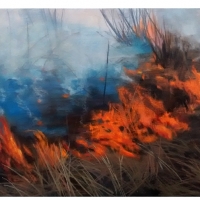 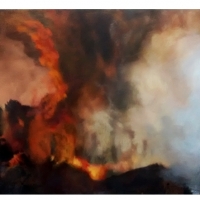 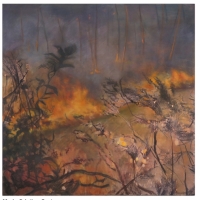 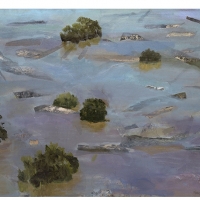 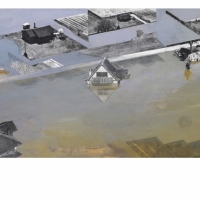 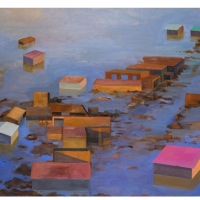 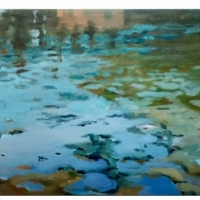 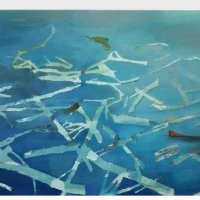 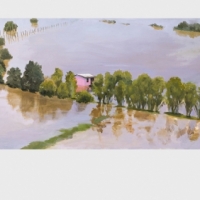 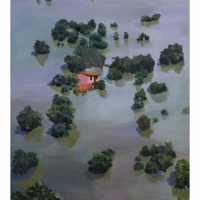