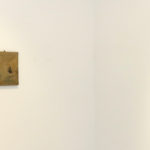 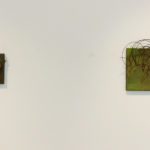 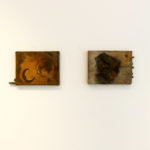 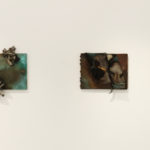 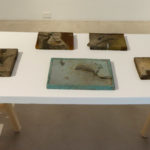 In his most recent exhibition, José Alejandro Bermúdez presents a series of sculptures that emerge from the duality between painting and sculpture, the serial and the singular, the movement and the static. A few years ago, the artist and architect was working on a piece in which he explored the smelting of bronze with oxides and steel. Inspired by the malleability of steel mesh, he created waves and shapes on the base of bronze, as such playing with the volume and alchemy of smelting. Recently, he decided to resume the exercise that he had interrupted and continue with this investigation around materiality. The result is the display Findings at Galería El Museo.

The act of finding alludes to the discovery of something, be it because one was searching for it or because it arises in a spontaneous way. In this process of search and exploration, creation and undoing, there is an interest in inventing a process in which the essence of bronze changes, where exogenous elements, from liquids, metals and even heat itself, play with chance and contribute to its transformation.

In Findings, Bermúdez’s sculptures arise from found objects, cuts of steel and experimentation with lost wax smelting, bronze and other metals. In these works, he rediscovers his past as a water color painter, incorporating watercolor pigments with oxides and acids that are applied to bronze. The chromatic accidents are translated in cerulean blues and purples that contrast with the ochres and golden tones that emerge from the metal, contrasting with the yellows and greens that are created by the patinas of the bronze. The forms of his works are small universes where one can see the traces of drawings and prints of objects, as well as the sinuous forms recorded by the lost wax smelting. In the pieces there are elements that repeat themselves, such as grids of wax, voluminous solids, spirals that jump out of the frame and entangled metal wires.

Bermúdez created his works at his workshop in Barichara, Santander, and in the workshop of sculptor Ricardo Villegas in Tabio. Villegas has been Bermúdez’s guide in this process of questioning the possibilities of bronze via the creative findings of the material and of its everyday use.

We cannot display this gallery