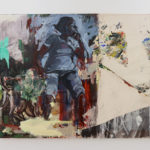 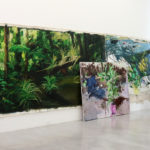 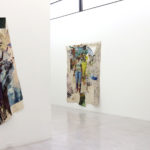 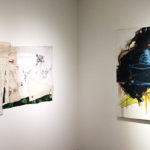 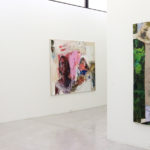 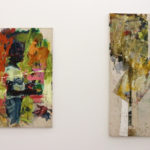 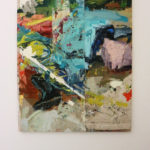 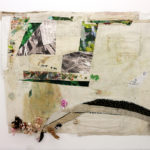 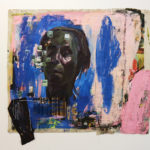 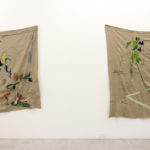 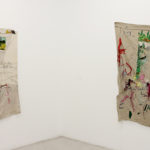 Las muy largas horas de Clementina Palacios is an in-depth representation of the life of Clementina, a woman from Chocó who came to work at the artist’s house in 1995 with whom the artist developed a close and affectionate relationship.

The title comes from Très Riches Heures of the Duke of Berry, an illustrated book of hours from the fifteenth century commissioned by John, Duke of Berry and produced in the workshops of the Limbourg brothers. As in Très Riches Heures, the works in this exhibition explore different moments of Clementina’s life and her daily activities through painting, patchwork, the orchard and embroidery, a technique that is rarely valued and which this exhibition wishes to revive. Clementina’s surroundings are portrayed based on the representation of the so-called rooftop herbs, which are medicinal and edible plants that are customarily grown in Chocó. These plants include anamú (petiveria) and cordoncillo (matico plant) which are local to the area and of vital importance in Colombian traditional medicine.

Vicky Neumann’s work materializes amidst harmony and chaos, construction and destruction. Her rapid colorful brushstrokes represent expressive and gestural landscapes of the tropical rainforests of Chocó. Amid the chaos, Clementina’s figure emerges as a testament to the strength of a woman who was able to provide for her family in the midst of adversity in Puerto Nuevo, Chocó, where illegal mining destroys the jungles of areas of the Colombian Pacific, transforming the landscape drastically.

The artist’s works become compositions that incorporate cut canvas, reconfigured paintings and, in particular, Clementina’s embroidery. These works require care and attention to detail. Beyond the colors and the dramatic nature of her gestures, there is a reality that can be perceived in the transformed landscape, in the threads that tell a story. Vicky Neumann, as a visual homage to Clementina, brings together the components of her daily life, her environment and the bond they both built and shared.